Our Pastors and Ministers Biographies

We are proud to present the Pastor's and Ministers that you will see preach from the pulpit of Living Faith Assembly!   We furnish this brief biography here for you to get to know a little bit more about each of our anoited preachers.

BIO:  Reginald, born in Portsmouth Virginia but raised in Richmond Virginia, by his very firm dad, now deceased and loving mother attests he would not have had it any other way. Reginald believes that the hands of the Lord have always been upon him but since his salvation, he truly knows if it had not been for the his parents and the Lord's plan upon his life, he would not have gotten through or be here today to honor his mother, Bernice Bryant, while giving his heavenly Father all the glory.
Before Reginald began his spiritual journey, he graduated from John F. Kennedy High School in Richmond, and then served from 1970 to 1974 in the Air Force where he diligently worked on fighter planes. Still seeking the challenge of working with his hands, replicating Jesus' craft, Reginald then became a carpenter and after 25 years of carpentry, Reginald retired from GES in Las Vegas, Nevada.
In the year of 1973, Reginald met his help meet, Antinita Logan and married her the same year. In 2013, they will celebrate 40 years of marriage. In 1974, Reginald and Antinita both gave their lives to the Lord at All Saints Pentecostal Church, in Richmond Virginia, where Elder Robert Tapper is called their Pastor. There they both were baptized in the name of Jesus and were filled with the Holy Spirit. All Saints Pentecostal Church is where Reginald knew he was a living tree planted and would grow in the Word of God. Reginald heard the Spirit of the Lord call him to ministry. Shortly after hearing the call, was the confirming word of Jeremiah 1:5, Before I formed thee in the belly I knew thee; and before thou camest forth out of the womb I sanctified thee, and I ordained thee a prophet unto the nations.
In 1979, Mr. and Mrs. Reginald Bryant moved to Las Vegas where they sought Christian fellowship with Golden Valley Apostolic Church pastored by Elder Charles Gamble. The Bryant's' then started the first phase of Living Faith Assembly in their home and the location of Third and Charleston Boulevard before co-pastoring with River of Life Ministries. River of Life Ministries is where Reginald Bryant was ordained as Pastor Reginald Bryant in March of 1997 by Pastor Amos and Pastor Shirley Mestas.
In 1999, Pastor Reginald and First Lady Antinita Bryant began the second phase of Living Faith Assembly. The ultimate purpose is to "Love God and Glorify Him thereby". It is a spirit-led, non-denominational church that is structured to teach the love of God while reaching souls and helping them learn of His love, His attributes and ultimately His Word. Pastor Bryant believes in the spiritual diet that consists of prayer, fasting, fellowship and the Word of God is the most important regimen all Christians need to exercise in order to be victorious in Christ Jesus.
Pastor Bryant is not only gifted in loving God's people, he is gifted and anointed to teach God's people. Pastor Bryant has successfully prepared, outlined, written and presented several classes that aid in the education and help for a Christian's life. His ordained ministers, leadership, students and congregation can affirm his love for God the Father as well as Jesus Christ his Lord and Savior and The Holy Spirit as his gentle teacher and guide to all God has for him to receive and give others.
Pastor Bryant confesses his love for family, the house of God, the Word of God, the people of God and the miraculous beauty God has shown him since before his submission to the Lord. Being placed in many plights, Pastor Bryant has experienced and seen the move of God and favors Romans 8:28, And we know that all things work together for good to them that love God, to them who are the called according to his purpose. His personal witness of God's sovereignty allows Pastor Bryant to deeply love God even more.  Pastor Bryant's greatest blessing and favorite thing in life as a Christian is being used by God solely for God's Purpose so that God may receive all the Glory. 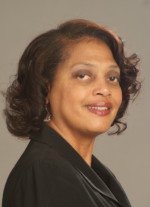 BIO: During our lifetime, we all strive to be first at something. Whether it is first in a race, first in our class, first in line, we have to strive to reach the finish line and obtain the prize. Our speaker today has had her fair share of firsts.

Antinita was born in Laurel, Mississippi, where she was the first born of 5 children.

In 1973 Antinita met and married the love of her life Reginald Bryant. They will be married for 40 years, this December. Reginald & Antinita moved to his hometown, Richmond, Virginia. It was there, that Antinita gave her life to the Lord in 1974 and ever since that day she has continued to grow in her love for the Lord and her fellowship with Jesus Christ.

Antinita and Reginald returned to Las Vegas in 1979. Pastors Reginald and Antinita Bryant have been active in the Ministry for more than 36 years. Presently they are the Senior Pastors of Living Faith Assembly, a non-denominational Church in Las Vegas which they began and have pastored in our current building for the last 14 years.

Pastor Nita has spoken at various events and churches. She has also had the privilege of ministering in the Philippians and Cuba where she laid hands on many and they were delivered and healed from various infirmities. She has a heart for hurting and lost souls and was called to the ministry of intercessor from the beginning of her salvation.

First Lady Nita ministers the word at LFA. She also teaches, counsels and disciples women in their walk with the Lord. She has served in the capacity of Youth minister alongside her husband for many years.  Nita's passion is to see people actively live the powerful Word of God.  Antinita enjoys the outdoors, loves walking and talking to God, going to parks and reading, traveling and spending time with her husband.

BIO:  Kiya, being born and raised in New York, was lead to Las Vegas and began her pursuit of the Lord in September 2000, by giving her life as a new creature in Christ, being born again. Kiya states that the highest calling in her life to date is her marriage to a man of God and being blessed with two wonderful daughters, both sucessful baccalaureate degree holders, who are both active in the ministry and love the Lord.
Educationally Kiya has graduated from Hempstead HS in Long Island, New York and has pursued credits toward an undergraduate degree. In her Christian education she has successfully completed courses in Theology, Discipleship Training, Homiletics and Church Administration. Kiya was ordain into the Lord's service in December 2016.  Kiya outlines the scripture, 2 Corinthians 11:5 where Paul mentions he might not be as eloquent in speech but his love of the pursuit of knowledge in the Lord.
Professional Kiya is a small business owner of "A Pink Teapot" where she markets and sells all types of international teas. She currently holds a "Professional Tea Consultant" certification and is licensed to do business in the City of Las Vegas. She is currently launching an on-line tea consulting series of videos as well.
As a follower of Christ and in His service she currently serves as the Sunday School Superintendent at Living Faith Assembly as well as the Youth Ministry leader and as the senior Pastor's personal executive assistant. Minister Kiya has been involved in virtually every area of church business and services, including the coordination of yearly and special events, including the scheduling of guest speakers. Based on her dedication to Christ and the word of the Lord, Minister Kiya has been invited to preach from the pulpit of LFA from time to time, as well as other pulpits and Women's meetings and other inspired spiritual meetings...Minister Kiya credits all that she does and has done to her love of our Lord Jesus Christ...

"Read some of the wonderful testimonies of the people of Living Faith Assembly, to see how God touched their lives."

Please stop by during these days and hours and join us in the praise and worship of our Lord Jesus:

Click the Link to take you to the form.

Can you open the PDF downloads offered here?  Do you need Adobe Acrobat Reader click this link.